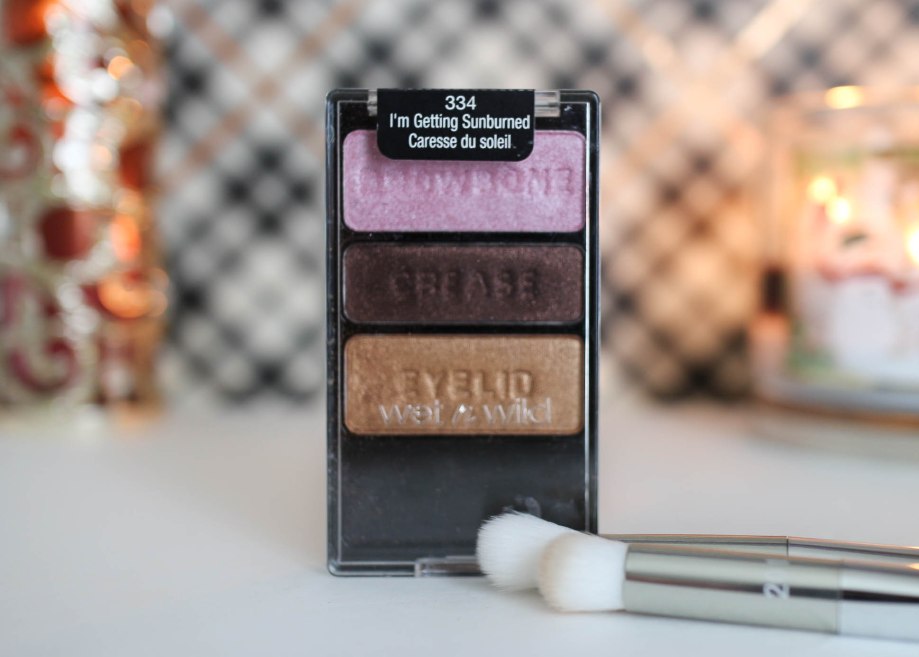 By now Wet n Wild eyeshadows have reached an almost hidden-treasure-like status or drugstore-holy-grail status. People love them and they are inexpensive, basically. Obviously, I had to try them and months ago I purchased three of the Color Icon Trios, one of which I have already reviewed most unfavorably. So does this one live up to the hype or does it follow in the crummy footsteps of Silent Treatment?

I think of all of the Wet n Wild eyeshadow palettes, this is the one I reached for first. The gold and brown caught my eye, the pink was like an extra. These have yet to be reformulated and are still in the original packaging, though I did buy mine months ago for about $3.

Each one of these eyeshadow palettes comes with the above: a sponge tip applicator and a tiny brush. Toss these, they are utterly useless, you are better off with the cheapest brush at the drugstore.

Originally I thought each pan was 1.16, but I recently noticed that the eyelid and brow bone shades are larger than the crease shade. Still, a decent amount of product in each pan.

The bottom color is a warm gold, slightly burned. The middle color is a dark brown you want to be careful with. The top is a pink with, I want to say, purple/lavender undertones and more of a sheen than glittery appearance. When I was swatching these, the textures took me by surprise because they are all different, which I expect from big palettes but not from a trio.

The gold is the driest, like I can hear my brush scraping it when I use it and I need to build it up some. The brown is much better, not dry in the least, smooth, buttery and oh so pigmented! Really, careful with that one. The pink shadow is on par with the brown but smoother.

When it comes to wearing them, they’re OK. The gold needs some building up and I think the brown is better suited as an eyelid shade because it is so pigmented and when I tried to blend it out in the crease it looked messy and dirty. As for the pink “brow bone” shade, ummm…It’s a strange one because it is too pigmented to be a flattering highlight and perhaps a tad too sheer to use on the lid. I do not see this flattering anyone’s brow bone and the day I wore it I was furiously trying to swipe it off in the office bathroom.

Initially I liked this trio however the more eyeshadows I try and the more I learn the less I care for this. The shades are pretty, not entirely unique, and require work; as a whole I wouldn’t say this is a must have. For three bucks it is just OK, relative to the quality we have come to expect from WnW shadows.